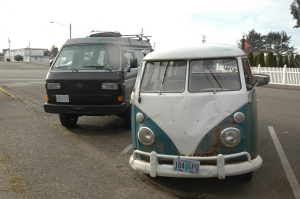 The VW community is a remarkable thing. When was the last time you shared a knowing smile and a tip of the hat with your fellow Mazda 3 or Honda Civic owner? This kinship and camaraderie is a prestigious honour reserved solely for owners of VW vans or buses. Admittedly, for me it is less of a tip of the hat than full out, hopping up-and-down, squealing with joy, and waving ballistically to the dismay of my mortified husband. I reek of nouveau VW. The Bus Movie, (http://www.busmovie.com), a film released in early 2013, really nails it when exploring the nostalgia and adventure behind the cultural icon. In the movie, one such tribe member puts it so succinctly that I most definitly couldn’t have said it myself. “There isn’t a VW bus owner that isn’t worthy of a beer and a conversation by the fire.” I am paraphrasing, but you get the idea. I believe that statement to be true. This is a lifestyle choice. It is a lifestyle choice that means you have to allot an extra five minutes at gas stations and corner stores to talk to stoked people about the van. Everyone has a story or a memory about them. If you run into a fellow van or bus owner, you are family-de-facto.  Robbie was sceptical about this new family, as it was one that he really wasn’t aware he’d signed up for and to him I think it sounded kind of cultish and creepy. But, within the first week the skepticism faded and he too was blown away by the kinship of the VW community. We met the nicest people and saw some beautiful vans. They even helped us with some surf spots, which, in the hugely territorial surfing world that reeks of localism, is a very big deal. There are some rules about this on-road waving that I am still figuring out. I think any model of the bus is fair game: Splitties, Bay Windows, and Vanagons are no-holds-barred waves. The lines are a bit fuzzy with the Eurovans. Most of them didn’t even look our way, which leads me to believe that they themselves are a bit removed from the scene. The jury is out.

One thought on “Peace, Love and Volkswagens”